ANP: fighting for the rights of journalists during the corona crisis

The National Association of Journalists of Peru (ANP), a union representing more than ten thousand journalists throughout the country, continues its work faithfully in the fight for the rights and duties of journalists in Peru. They do this even more during the current national and international emergency that is COVID-19: a time when the work of journalists is regarded as an essential service. 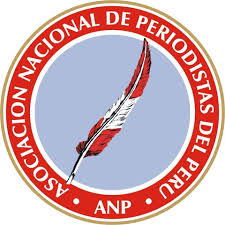 During the almost two months in which Peru and the rest of the world has been isolated, people deserve to be informed about what is happening. It are the journalists who, true to their profession, take on the laudable and selfless task of providing this information.

ANP stresses that, under the Health and Safety at Work Act, journalistic companies in Lima have a duty to provide their press staff with masks, gloves and other types of PPE. This was demanded by the union and is well respected in the capital. However, in the rest of the country, 80% of journalists work as self-employed or freelancers for radio, television, regional newspapers and digital media. It is these colleagues who are hardest hit by the health crisis and the resulting economic crisis, because their income is completely lost because there are no more opportunities to sell advertising due to social isolation. Yet, true to their mission, they continue to inform the population, even risking their own health and that of their families. 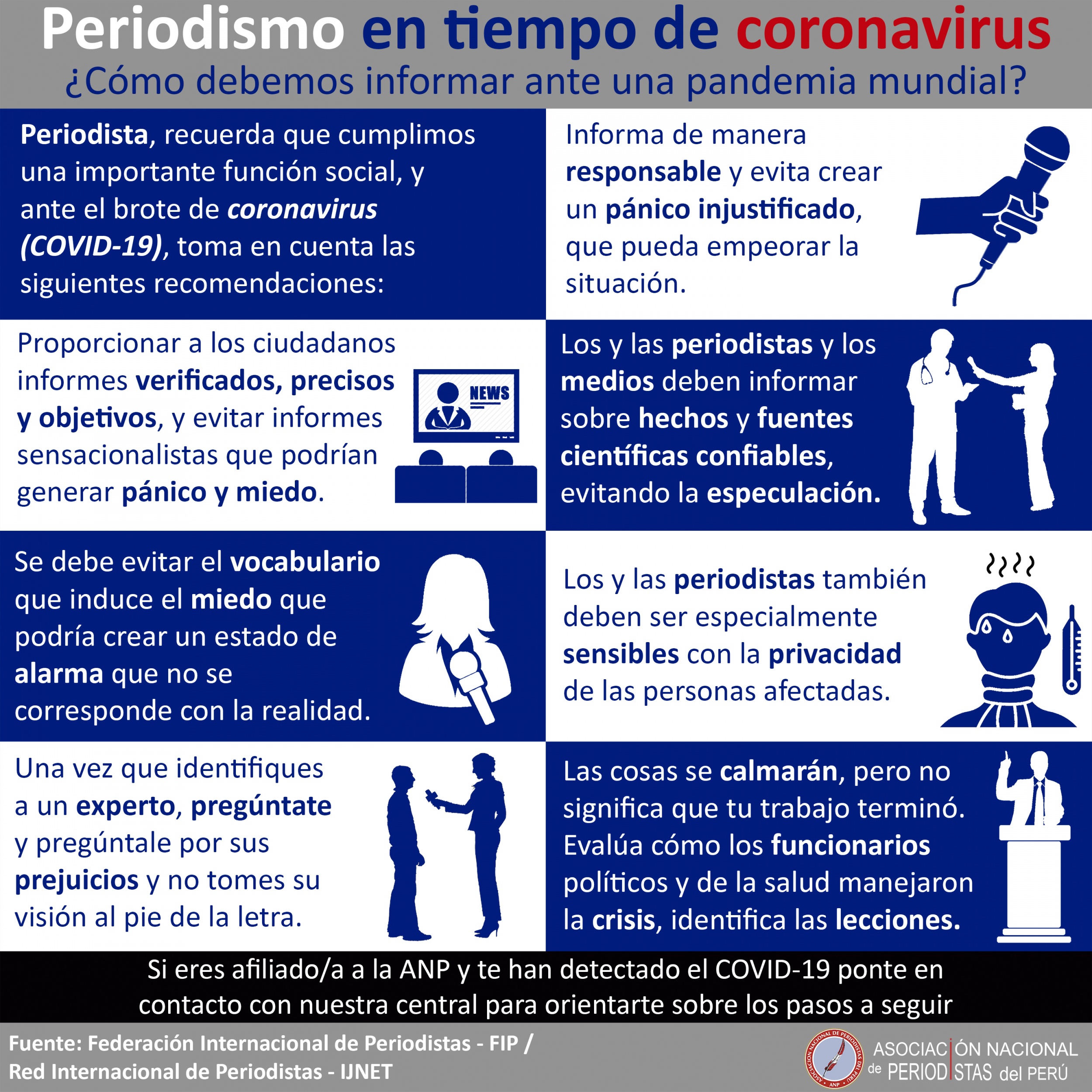 The Peruvian press union ANP has asked the Minister of Health to provide masks in the hospitals under his authority for the press workers who are also working there on a daily basis. At the same time, ANP regrets that in certain regions of the country such health supplies are not even available anymore. They demand that the state also protects those who are in the frontline of information. For the distribution of masks, it has been proposed to request the following information from journalists:

Journalists have already fallen victim to repression and abuse based on their profession in various regions of Peru such as Puno, Junin, Abancay and Cusco. In light of this, ANP condemns the excesses of the police, rejects verbal aggression and threats against journalists, and has reiterated its concern about the continuing obstruction of journalistic work in the midst of a national state of emergency. The union considers it unacceptable that some local authorities are opting for secrecy in a context of a national and health crisis in which information of general interest is more important than ever. 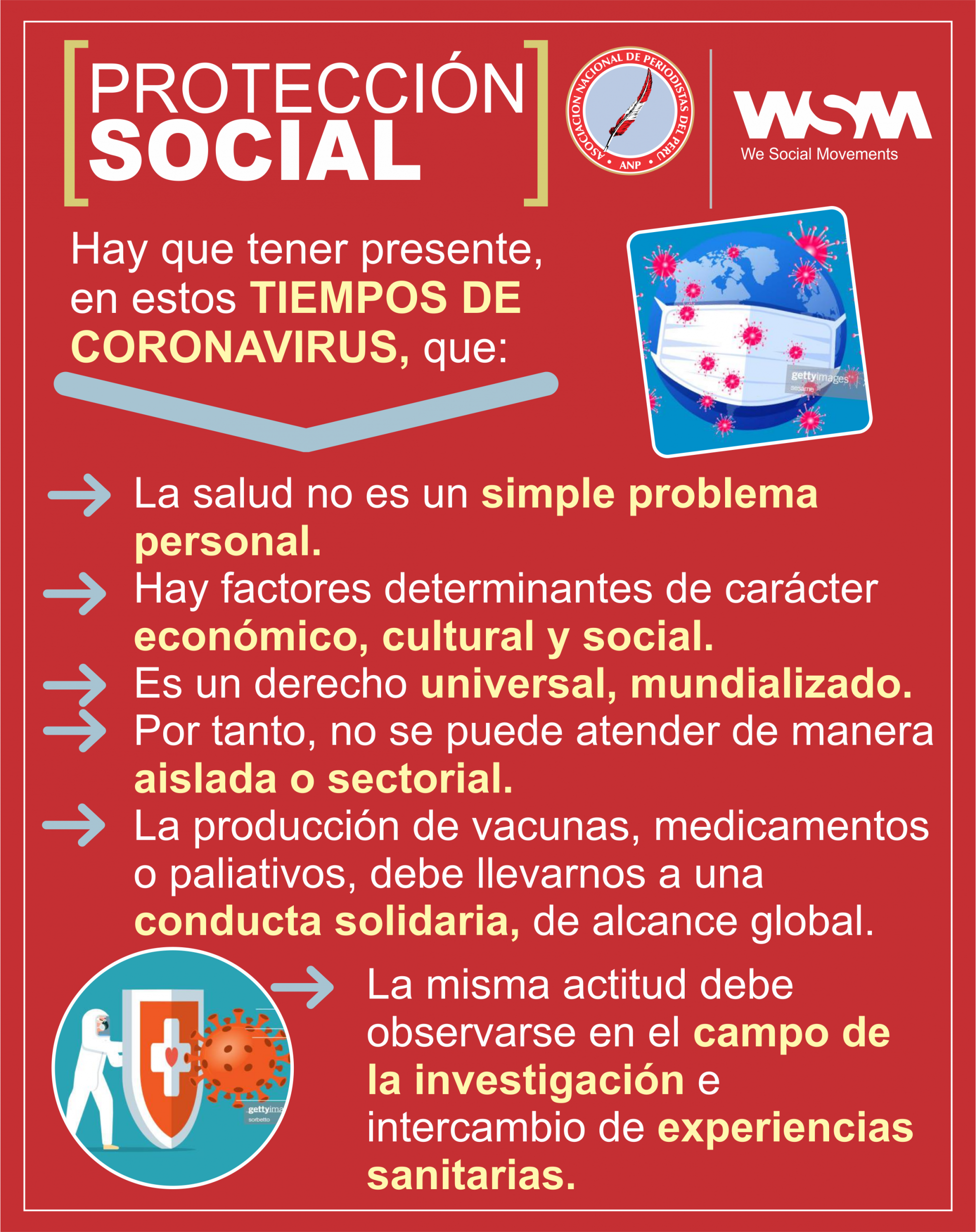 ANP has made its voice heard with a statement on the many problematic aspects of the so-called "perfect suspension of work", which applies during the national emergency. Indeed, the measures proposed are lethal for those working in the formal sector on temporary contracts. ANP therefore calls for more control and regulatory measures, as laid down in Emergency Decree No 038-2020.

The Peruvian press union draws particular attention to the impact of this measure on those working for newspapers since those, as private entities, can resort to these severe legal measures, protected by the indisputable fall in income. Unfortunately, this is already manifesting itself in holiday advances, delays in monthly payments and even wage cuts.

ANP will remain steadfast in defending the rights to social protection of journalists in Peru, all the more so now that they are dealing with an unknown enemy such as COVID-19.

Impact of COVID-19 on young workers