"My parents don't go out anymore, so they asked me to do their weekly shopping," Christine tells me, while we wait our turn at the local bakery, of course at a safe distance from each other. "They have friends their age, but they don't have any family or acquaintances nearby, so I do their shopping now."

This is the type spontaneous solidarity that you can now see everywhere around you, and that is so important for the elderly in our society, says OKRA on its website, As the largest association for the elderly in Flanders, OKRA knows what it's is talking about.

Being elderly in times of COVID-19 is no laughing matter

Similar solidarity-initiatives can be witnessed in other regions as well. The associations for the elderly with which WSM has worked for years in Burundi (CBY), Congo (WAWE) and Rwanda (ARR) report that food prices are rising rapidly. Elderly people are the biggest victim of this, because they have little to no income and are not always very mobile. They have now decided to put together food parcels on a larger scale and distribute them to the rural communities in which they are active.

“That's not unimportant, because the elderly are very vulnerable,” says Koen Detavernier of WSM. “The World Health Organisation’s statistics don't lie. People older than 60 years form the largest risk group for COVID-19. They are more likely to have pre-existing conditions and their immune system is often no longer fully functional.”

What's more, all of the global social distancing measures mean that the elderly are more likely to become socially isolated. Children and grandchildren can no longer visit. All activities, excursions and trips of associations for the elderly have been postponed. As a result, many elderly people lose their (sometimes only) social contacts.

The income of the elderly is also threatened by the current crisis. In normal times this income is already very irregular and (much) too low. The support they receive from their families, who are also increasingly struggling to make ends meet themselves, is disappearing and on top of this the elderly often have to give up their own livelihoods. In low-income countries, only 20% of the elderly have a pension. Others receive some minor social assistance benefits. But these benefits are also under pressure, because the offices where pensions or social benefits are paid are often closed for security reasons.

There is no doubt that the elderly have an even more difficult time than others during this period. It is equally clear that governments and international organisations can take action to better support the elderly. However, the elderly must be given a visible place in the policy that is being set up. This is also the main demand of Help Age International, an international network of associations for the elderly, with which WSM and some of its partners have been collaborating for some time now: policy must take into account the specific situation of the elderly in the preparation and implementation of all possible interventions and ensure sufficient consultation with associations for the elderly!

So far, nothing new. Already in 2016, WSM and OKRA campaigned for social protection for the elderly around the world with the same thought in mind. A liveable pension and access to affordable care; those were the demands at the time. Today, too, it is clear how important these forms of social protection are to support the elderly and guide them through this crisis as safely as possible. That it is possible to put these recommendations into practice and that social organisations play a key role in this is demonstrated by the actions taken today by the organisations of the Network for the Right to Social Protection.

All elderly people are entitled to a liveable pension! That is a right, with or without the corona-crisis. But especially today, policymakers urgently need to work on decent pensions. In times of lockdown and growing isolation, the elderly need income security to meet their needs.

In Belgium, ACV-CSC, OKRA and Eneo have been fighting for decent pensions for years. This demand has grown even stronger in recent years because government after government is tightening the conditions for (early) retirement, backtracking comparable schemes (such as time credit) and leaving those people with (often involuntary) part-time jobs or an incomplete career out in the cold. In 2020, the year in which the Belgian social security system celebrates its 75th anniversary, ACV-CSC puts the need for a decent pension back in the picture. 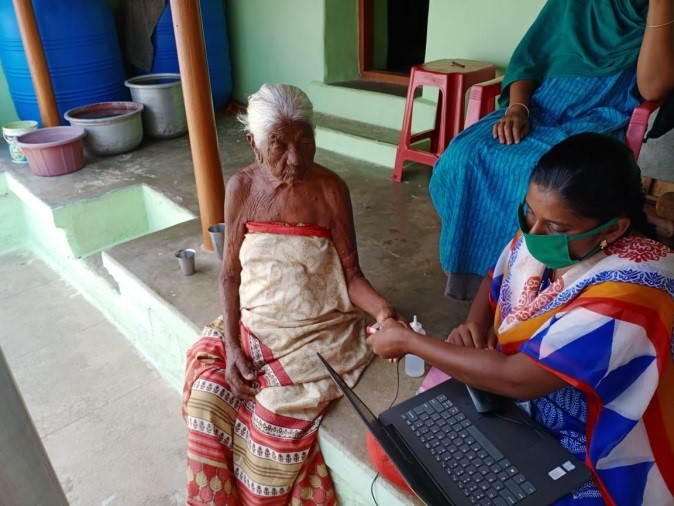 However, in those countries where the elderly can count on some form of pension, it must be guaranteed that it is actually being paid. Help Age International notes that many offices are being closed. It is therefore urging local authorities to continue these payments, but with due regard for the precautionary measures in place. If the elderly have sufficient information about the virus and how to protect themselves, the organisation reasons, they can still sign up for pension plans.

Our partner AREDS, active in Southern India, has gone one step further. Equipped with protective gloves and masks they go to the people to distribute their benefits. In just a few days, they reached more than 70,000 people who were entitled to emergency benefits. For the payment of pensions, the organisation searched and found larger spaces instead of their usual offices, where the minimum distance between people can be insured and where equipment is provided for washing hands. For the correct identification of the beneficiaries AREDS uses biometrics. People who find it difficult to move around will receive their pension at home.

The access to care is of course primarily a matter of access to health services for people who actually become ill. But other concerns are also important for the elderly: access to food, medicines, hygiene products and social support. Because being healthy is about more than not being sick.

In Bangladesh, only 112 intensive care beds are currently available for Corona patients. And this for a population of 165 million. The health services provided by Gonoshasthaya Kendra (GK) through door-to-door visits and in its hospitals and health centres are thus vital. In addition, GK also provides medical care to the many thousands of Rohingya refugees detained in refugee camps in northern Bangladesh.

Due to its long track record in the medical field, GK has now also succeeded in developing an affordable test kit. With this they can now start testing on a large scale in the many areas where this kind of test could otherwise only be imagined. GK is only waiting on the green light from the government and the World Health Organisation.

Because of its extensive work in rural areas, the organisation also comes into contact with the many households that are without income because their children (working in the city) no longer have a job. That is why they also started distributing food parcels to 100,000 people. Vulnerable elderly people are given priority.

Social support is also crucial in these times. We must ensure that the elderly do not become even more isolated, as recommended by Help Age International. And this can be done in different ways.

OKRA has launched several initiatives in this area. Professionals and volunteers regularly call the oldest and most vulnerable members to hear how things are going, so that they can still talk to someone. Local groups try to keep in touch with the residents of the residential care centres: by giving small gifts, by waving in front of the window, by handing out letters and cards... Mouth masks are also sewn for local residential care centres. Moving around is also very important for seniors. Especially now that they can no longer go outside. That is why OKRA, together with Saartje Vandendriessche, has made short videos with simple exercises that everyone can do at home. "Move in your home". Since the beginning of the Easter holidays these are broadcasted daily on the national broadcasting station: VRT.

CM-MC and Familiehulp (English: Family Aid), also each help -in their own way-vulnerable elderly person through this difficult time by taking on care-tasks, assisting them with their paperwork and so on.

Social movements around the world are making a huge difference for the elderly every day, not only during this unusual crisis, but also on every 'ordinary' day. That deserves respect! Together, we are strong!